With volume for the month projected at 1.122 million units,
November U.S. auto sales are estimated to translate to an estimated
sales pace of 14.1 million units (seasonally adjusted annual rate:
SAAR). This would represent a sustained improvement from the May
through September period but will reflect a decline from October’s
14.9 million-unit pace, according to S&P Global Mobility
analysis.

The daily selling rate metric in November (approximately 44-45K
per day) would be in-line with levels since September. Translation:
From a non-seasonally adjusted volume standpoint, auto sales
continue to plug along at a steady pace. 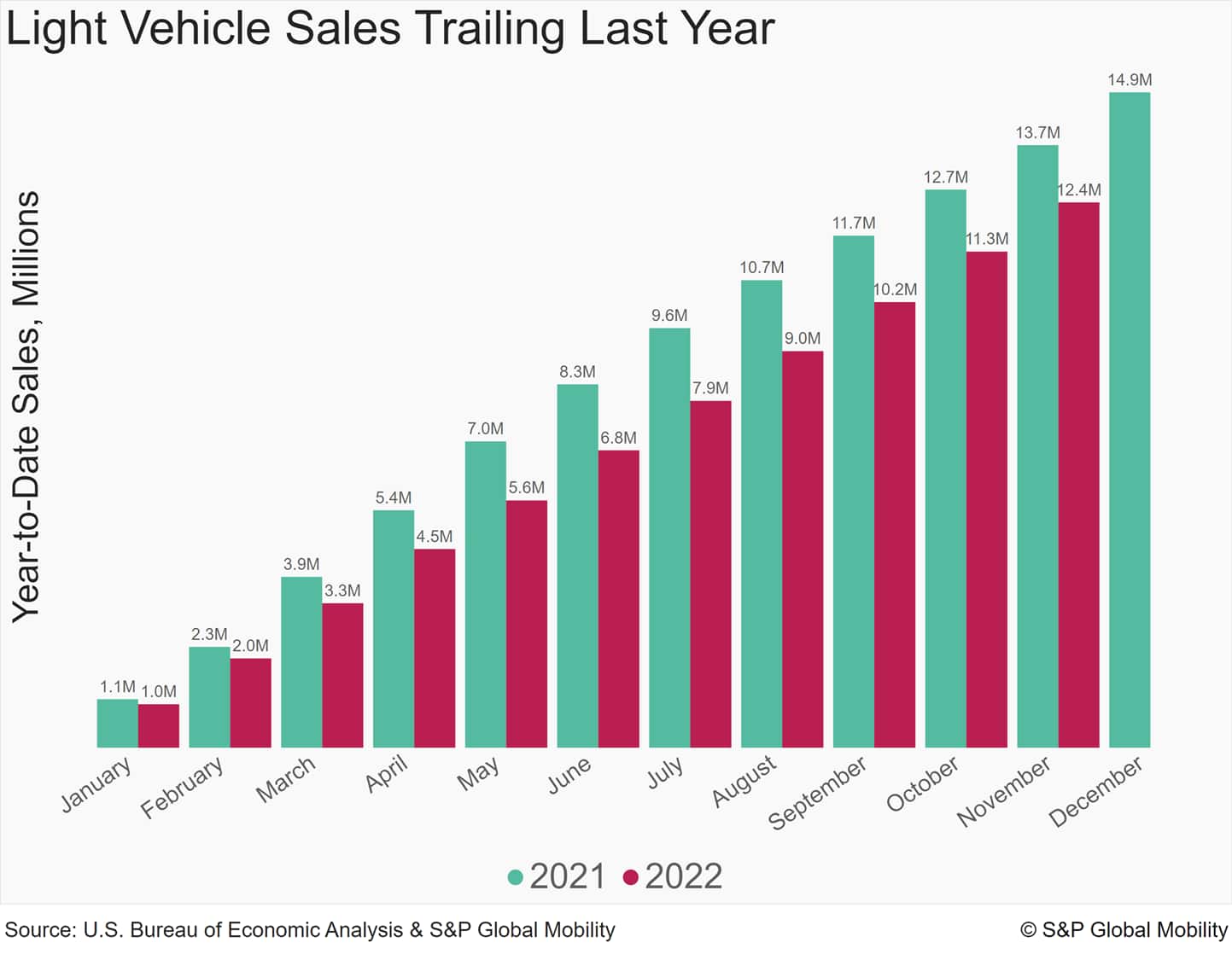 “Sales should continue to improve, given the expected sustained,
but mild, advancement in overall production and inventory levels,”
said Chris Hopson, principal analyst at S&P Global Mobility.
“However, we also continue to monitor for signals of
faster-than-expected growth in inventory. Currently, there are no
clear signs; inventories have advanced as anticipated. But any
indication of faster than projected growth in the overall stock of
new vehicles could mean that auto consumers are feeling the
pressure of the current economic headwinds and retreating from the
market.”

As a result, October’s SAAR boost is likely to be an anomaly
compared to the remainder of the year, Hopson said, adding that
there are expectations of volatility in the monthly results
starting in early 2023.

Market share of battery-electric vehicles is expected to reach
5.9% in November. However, outside of the large coastal cities,
retail registrations of EVs have yet to take hold, according to
analysis from S&P Global Mobility.

The top-eight EV markets in the US are all in coastal states and
represent 50.5% of total EV registrations so far in 2022 (through
August). The greater Los Angeles and San Francisco metropolitan
areas alone account for nearly one-third of total share of the US
EV market. Meanwhile the Heartland states’ market share of EV sales
is barely half of what they contribute to overall vehicle
registrations.

“BEV market share control on the two coasts is attributed to
their higher mix of early adopters compared to buyers in middle
America,” said Tom Libby, associate director of Loyalty Solutions
and Industry Analysis at S&P Global Mobility. “Their
demographic profile is more in sync with the traditional BEV buyer
than the middle-American profile.”

But Libby sees potential for EV acceptance in top heartland
markets: “More acceptance and much broader consumer awareness is
resulting in a natural progression of adoption from the coasts to
the Heartland.” (For more on this analysis of EVs in the Heartland,
please see
this special report.)

According to Stephanie Brinley, associate director of
AutoIntelligence at S&P Global Mobility, “As auto shows at
their best highlight what people will be driving in coming years,
the reveals during the Los Angeles Auto Show reflect the continuing
push toward electric and electrified vehicles.”

Of note, Fiat announced it will bring a version of the European
500 EV to the U.S. starting in early 2024, reviving the 500e
nameplate. Toyota’s reveal of the 2023 Prius hybrid included a
Prime trim that will double the hatchback’s EV-only range, while
the automaker also showed a rendering of the bZ (“Beyond Zero”)
electric-vehicle concept, previewing a forthcoming compact SUV.
Meanwhile, Vietnamese entrant VinFast showed U.S.-trim versions of
two EV crossover additions to its lineup – bringing its potential
US offerings to four.