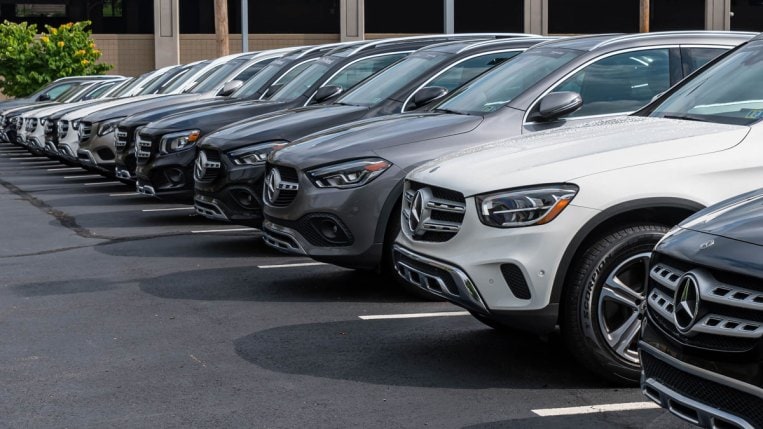 Car shopping comes with rules. Rules like “the sticker price is just the starting point and negotiate down from there” and “cars are cheapest at the end of the month and end of the year.”

That rule book got thrown out in the last two years. Shoppers grew accustomed to paying more than MSRP, or the manufacturer’s suggested retail price. They watched prices rise steadily, with no cyclical drops. The end of well-established patterns leaves many car shoppers scratching their heads. The question we get most is, “When will new car prices drop?”

The answer is more than a little complicated. In some cases, new vehicle prices already started to decline. In others, they may not drop for the foreseeable future. The new world of car shopping requires an open mind and new skills.

Brian Finkelmeyer of Cox Automotive likens shopping for a new vehicle to this quote from science fiction writer William Gibson.

“The future is already here. It’s just not evenly distributed.”

Finkelmeyer is the senior director of new-vehicle solutions at Cox Automotive, the parent company to Kelley Blue Book.

In this story, we’ll explain how to navigate the new patterns of car buying and dealership pricing, so if you’re in the market to purchase a vehicle, you’ll be equipped with the best information we know from our experts. We’ll also dig deeper to answer the question about car prices dropping, even if the answer remains unclear.

Car prices reached an average transaction price of $48,281 in October, up 3.8% from the same month a year earlier. According to Finkelmeyer, these are the typical factors affecting the new prices of cars:

However, all four have seen major disruptions in the last two years.

Some Brands Have Inventory, Others Don’t.

In the past several years, inventory fell to record lows, driven largely by a worldwide microchip shortage. Without enough crucial microchips, which control everything from engine timing to navigation systems, automakers haven’t been able to build cars as fast as they’d like.

Automakers measure their stock of new cars to sell in a metric they call “days of inventory” — how long it would take them to sell out of new cars at today’s sales pace if they stopped building new ones. As recently as 2019, most of them aimed to keep six weeks (or 42 days) or more in stock. In 2022, many automakers’ inventory fell to just seven days.

RELATED Is Now the Time to Buy, Sell, or Trade-In a Car?

Some carmakers recovered, while others did not.

“Some brands, such as Buick, Jeep, and Ram, have days’ supply ranging from 75 to 85,” Finkelmeyer says. Others still sit well under normal. “Kia has a brand average days’ supply of 19.”

Incentives Now Differ from Brand to Brand, Lot to Lot

When automakers routinely built up an oversupply of cars, they would discount them to get the vehicles off dealer lots.

Now that some have no glut of cars to sell, they’re barely discounting. Others still need to discount cars to move metal.

Traditionally, dealers often tack their own discount offers onto manufacturer incentives. You’ll see those less often at the moment.

The More Valuable Your Trade-In, the More Disappointing the Offer

Trade-in value is the last factor driving prices and the strangest in today’s market.

“Used-car inventories across the country are currently bloated with expensive used merchandise priced over $35,000,” Finkelmeyer says.

Automakers scaled back production for several years after the 2008 recession. That leaves the higher-mileage, older cars dealers sell for less than $10,000 particularly hard to find now.

Meanwhile, high gas prices throughout 2022 have some buyers looking to shed less fuel-efficient, new-model trucks and SUVs — even if they’re relatively new.

Dealers value your trade-in based partly on what they need in stock. They’re more likely to offer a good deal on a car fewer people are looking for right now. Car dealers are oversupplied with relatively expensive used cars.

“Consumers trading in a 2018 Honda Civic will be much happier with the trade appraisal than those trading in a 2021 Jeep Grand Cherokee,” Finkelmeyer explains.

New Skills for a New Market

So, when will vehicle prices go down?

For some brands and some dealerships, prices began dropping a bit.

“For some volume brands like Honda, Kia, and Toyota, new inventories remain very tight in the 20-to-30 days’ supply range, and deals are nearly impossible to find,” Finkelmeyer says.

With other brands, shoppers must be prepared to hunt. For example, Chevrolet and Ford currently have between 40 and 60 days’ supply of some vehicles. That’s nearly the historical norm.

Still, other carmakers face a glut of new vehicles to sell. “If consumers want the best selection and the best deals, they should head down to the local Jeep or Ram dealer,” Finkelmeyer says. Those dealers “are offering 0% for 48 months or 2.9% for 72 months on select models.”

Full-size SUV shoppers will find the Ford Expedition, Chevrolet Tahoe, and GMC selling this month for close to sticker price. The Jeep Wagoneer is being offered with an incentive of over $4,700.

Compact SUV shoppers will find discounts on the Nissan Rogue and Jeep Cherokee (leading the segment with 45 days’ supply) but not the Toyota RAV4 (rare at the moment, with just seven days).

Shoppers should also be prepared to shop their trade-in around. It’s slightly more complicated to pull off, but it may make sense to sell your old car to one dealership and buy your new car from a different one if the numbers work out better. Use the Kelley Blue Book Instant Cash Offer tool to shop your trade-in to dealerships near you. When you let the deals come to you without any obligation, you can choose the trade-in offer that works best for your situation.

What to Expect: Looking Ahead

But what if you desperately want a popular car that’s in low supply? Then you may need to be patient.

“Ultimately, we believe inventory and incentive levels will increase in the future,” Finkelmeyer says. Recent Federal Reserve moves to rein in inflation are making big-ticket purchases harder for everyone. That will slow sales.

The microchip shortage will likely resolve sometime in 2023. That will increase supply.

Those trends could bring down the price of even the most popular cars. But experts can’t put a date on when that will happen. Instead, Finkelmeyer says, shoppers should be flexible.

It’s already possible to find a low price on a new car. It just may not be the car you thought you were going to buy. Or you may need to go buy the car in a smaller town outside of the big city where the competition isn’t as tough.

Happily family ever after